I created a video which gives a behind the scenes tour of the Studio Bob show, and an over view of the gallery that... "New York artists would kill to have this space."  I've run into many people who have had such hectic lives over the holidays that they couldn't make it out to the show - and after hearing what some of you have been though - it's totally understandable, so here's a bonus video.
"Every Stupid Holiday" Melissa Klein Solo Show Studio Bob

I'm really excited to announce a new line of small notebooks, $7 for those occasions of "Gaw.... I forgot..."  The notebooks are designed to fit nicely in a jeans pocket or purse and have a good-quality heavy-weight paper.  You can also use them to write notes and affirmations in them such as:  "Do not apologize for things that are not my fault - really."  or... "No blonde jokes around Dolly.  That's not OK."  or... "Don't blame farts on the dog.  They know..." 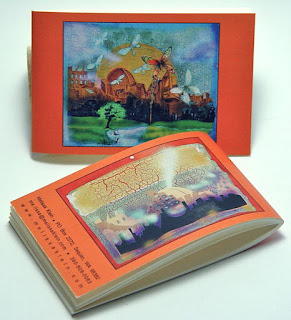 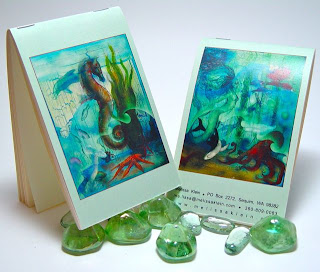 Kathy Charlton of Olympic Wine Cellars came out and collected "Passing Through" (She owns another original called "Curse of the Good Girl") and wrote a story about her experience.  It was great to have her perspective.  http://www.olympiccellars.blogspot.com/
Cards, prints, posters available
MAKE THE UN-RESOLUTION!
There's a phrase that I invented over the summer:  "I do not ask permission, explain or apologize to people who don't care about what's in my best interest." It came out of a conversation with my husband where I was worrying about disappointing people who wanted to put me in an unfair situation.  It's been surprisingly effective at quickly shutting down conversations with people who truly don't deserve an explanation or want to engage in a power struggle.  I usually just think it, and then stop and glare.  They back off.  I know that it contains too many "don'ts" to be considered a true affirmation, but it works.
So what not to do?
Don't give up.
Don't give in.
Don't accept lies for truth.
Don't feel guilty for standing up for what is right.
Don't chicken out.
Don't play it safe.
Don't play small.
Don't stop doing what feels right.
Don't be incongruent.
Don't support businesses that don't support the community or the environment.
Don't worry about disappointing people who don't care about the greater good.
Don't feel guilty about not fixing other people's frak-ups.  No change will happen if enabling is going on.
Don't confuse helping with enabling.
Don't stop trying.
Er... I should put "Don't stay up too late..." but it's 3am.  Bed time for Bonzo.
But DO... Have a very happy New Year!
-Melissa
Melissa Klein • PO Box 2272 Sequim WA 98382 • me.lissa@melissaklein.com • 360-809-0083 • melissaklein.com
Posted by Melissa Klein Art at 5:43 PM No comments: