There is a tale of a Tibetan monk who was followed by a dragon wherever he went. This dragon tormented him and made his life a living hell. The monk tried moving to many different places, but always after a day or two, the dragon would appear and torment him. Finally, the monk said to the dragon "Open your mouth." The dragon opened his mouth. The monk went in. The dragon disappeared.

About 8 years ago, we adopted a pregnant, Percheron (draft) rescue horse from the pharmaceutical industry - that was a tipping point for many positive changes. About six weeks after we adopted April, (full name "April Hester Prynne - after the lady in "The Scarlet Letter" by Nathaniel Hawthorne) she gave birth to Hawthorne. Even at birth, he was never small. And then he got bigger…

"Hawthorne at the Awkward Age" by Melissa Klein

I've been working on training Hawthorne - who is now considered a teenager in draft horse years. He tips the scale at about 1800+ pounds and his back is higher than my head. Training April was challenging, but she's a really easy horse for me - we think alike and when not certain, slowing down and petting works wonders. She's turned out to be a great trail horse - solid,  sensible and willing. Hawthorne - needs play, creativity, games, reverse psychology, and fun - which can be hard to deliver when I'm feeling unconfident.

"Hawthorne Sticks Out His Tongue" by Melissa Klein
"This dragon tormented him and made his life a living hell."

Hawthorne… has developed some bad habits due in part to my inexperience and in part to an inconsistent training schedule. And any bad habits he has - are my responsibility to work out. No former owner or past trauma to blame here… No finger pointing. One of those bad habits is if he gets bored during ground work, or if I push him too much, he just turns and bolts. It sucks! I try to stop him by jerking the rope, or if I can think quickly enough, have him turn around or do something different. But there's this moment where he turns, his massive butt bunching up and then he springs away like a runaway freight train and I am helpless to stop him. I've tried and have the rope burns and blisters to prove it.

"The monk tried moving to many different places, but always after a day or two, the dragon would appear and torment him."


I've been working hard on this for the last nine months - and while there are a few days here and there that are missed - overall I am so much more consistent. He is more respectful - and has a better attitude and is willing to do much more. It happens less frequently, but there are still those times, where he turns and bolts. It happens usually just when I feel like we are "making real progress" and maybe ready take him off the property and out on a trail in the next week. Hopes dashed. Back to square one. Two steps forward, three steps back. And it sucks! Because until this problem is fixed, there is no way I would take him outside a fenced in area - the idea of him running into the street or over some hapless bystander is terrifying.

"Finally, the monk said to the dragon "Open your mouth." The dragon opened his mouth. The monk went in. The dragon disappeared."

I had an "A-hah" moment. Train him to come to me when I let go of the rope. Let go of the rope on purpose. Give him lots of rewards, scratches and praise for doing so. Instead of the reward for him being when he gets to run away from me;  make the reward be to come to me. Try it at the walk, the trot and the cantor. Try it in the round pen, and then in the larger field. Try it on a 12' foot, 20' and 40' rope.

Something shifted in doing this. It took only minutes to train him to do this. And while I haven't quite tested it thoroughly enough to take him off outside a fenced area - it seems to be working - at least on a 20' rope on an acre pasture. He comes more quickly to me now, even when he's at liberty. He seems more positive. I'm feeling good enough about the groundwork, to start riding regularily.

"Bright Star - Hawthorne" by Melissa Klein
For me, to go into the dragon's mouth was to let go of the rope. This made what I had wanted all along to happen - to have my horse want to stay with me. It enabled having more control through letting go.

In "Switch - How to Change When Change is Hard" by Chip and Dan Heath, one of the things that can galvanize people is something called a "B.H.A.G." which stands for "Big, Hairy, Audacious, Goal." Hawthorne is my B.H.A.G. - do groundwork without having him bolt away, ride him at the walk, trot and canter with confidence. Ride on trails with streams, bridges and through rough terrain.

Please email me at me.lissa@melissaklein.com

Posted by Melissa Klein Art at 12:27 PM No comments:


TELLING YOUR STORY
Ever had a situation where you felt un-heard and not respected? Ever challenged the status-quo and found yourself unpopular? Ever felt stuck in a self-limiting belief or felt overwhelmed with fear? Scroll down for some techniques to be heard, deal with fear and achieve your best result.

Everyone needs a chance to tell their story.
- Sam Keen "To a Dancing God"

We all want to be heard and we all want to speak in a way that others will listen. Many of the frustrations in life are a result of not being heard: a boss, a spouse, a child, a co-worker that "won't listen."

I used to work for a woman who no matter how I tried to communicate that I wasn't happy with my job description - just didn't get it. She would give lip service or would simply try to "steam-roll" me into doing things that were incongruent with the direction that I wanted to go and my talents.

Ironically, I had a vision of being of greater service - but in a different way. She needed to plug in holes in the staffing and saw me as someone who was versatile, hard-working and who could be exploited. While there was a basic disagreement about what was needed for the organization - the worst part was feeling like my words were falling on deaf ears. We had different stories.

Does this story sound familiar? While the details are going to be different from experience to experience or from person to person - it's a familiar lament.

Is this the story that you want to be?

When I was going through this, my thinking brain was saying things like "Poor little me. A victim of a cruel boss." and "I'm going to starve!" "I won't be able to pay my bills and we will have to give up the horses and the house!" "I'm being difficult! I'm being a bitch! Why can't I just go along with her plan and be a nice girl?"

Can you hear the victim story in this? Or the bitch? Stand up for yourself and have everyone hate you vs. be a doormat and be liked.

All through this, I was painting, creating some of my strongest work. Through the painting and using images, I was able to access messages from my unconscious about what was going on. And the messages I got from this process were very different. When I was creating this painting I was actually in a really bad funk that day - and was somewhat puzzled to have such a happy image come out of me. 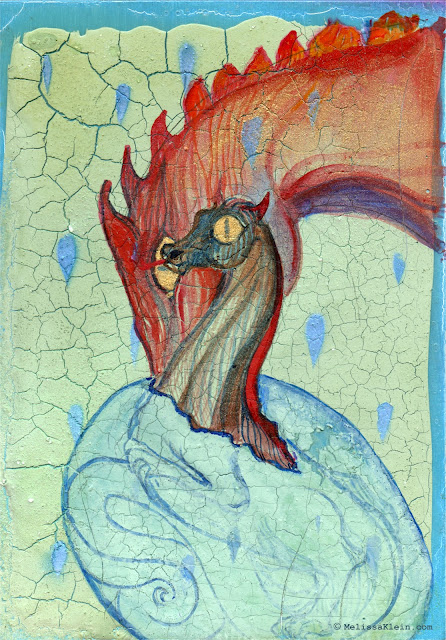 And then there was the "A-hah!" - The dragon is a symbol that I've been drawing since childhood. And I realized that what was happening was the dragon was breaking out of it's shell, which is a hard process - but necessary.

If a well-meaning person was tries to "help" a chick break out of the shell, by peeling the shell away, then the chick will die. The chick needs to develop their muscles by going through the process of struggling through the shell. Breaking out of the shell is a difficult and uncomfortable process - but it's necessary for growth. The larger dragon behind the baby dragon could either be read as a supportive powerful mother figure or as the baby dragon all grown up. Either way - a positive thing. The painting is called "Naissance" which means birth.

I kept talking and sending emails and phone calls and questioning the status-quo until - finally - I was heard! A higher-up in the organization read my proposal about what I wanted to do and I was offered a much, much better position working with people who understood my vision.

Without the paintings - I don't know if I could have done it. Images helped to change the story from being a victim to seeing growth and accepting the uncomfortableness of change. That acceptance lead to being on a path of growth and to break out of those old paradigms and see them as shells that needed to discarded.

We all need to tell our story, we all want to be heard, but…. the most important audience for your story is YOU!


When confronted with a difficult situation:


• Ask yourself if this is the story that you want to be?

• Notice what images you feel attracted so - and what they might be telling you.

• Record your dreams, and if they are disturbing - look to what the symbols might mean - i.e. snakes not a bad thing - they mean power and healing.

• Pay attention to your language - does it sound whiney or point fingers? What would it take to rephrase some of those sentences to be coming from a place of strength? Write it down and practice it.

• Write your own happy ending. Hold onto it. Enlist positive friends to help you visualize it.

PS - I'd love to hear any thoughts or insights you have around telling your story. Send me an email at me.lissa@melissaklein.com

Posted by Melissa Klein Art at 9:50 PM No comments: